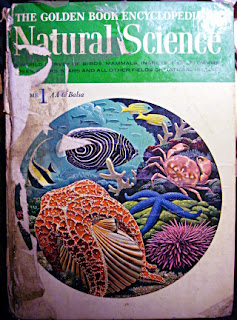 It was the early 1960s, and I was about three years old.  I was spending the day at my Aunt Flora Mae's house.  My Aunt was in the kitchen, and I was roaming around the living room, exploring.  This book was lying on a shelf underneath an end table.

Books were scarce in  the houses I visited then.  Other than a Bible, there might be no books at all.  After some  hesitation, I picked up the book and opened it.  It was wonderful!  It had so many things in it!

My Aunt came into the room.  She smiled at me and said, "Do you like that? You can have it."


I've never been more surprised.  You mean I can just have it?  This treasure?  I'm not sure what I said.  I was shy.  I probably nodded.  And I took the book with me when I left.  I've had it ever since.

Thousands of books later, it's still one of my treasures.  Just look at it.  Here are the endpapers: 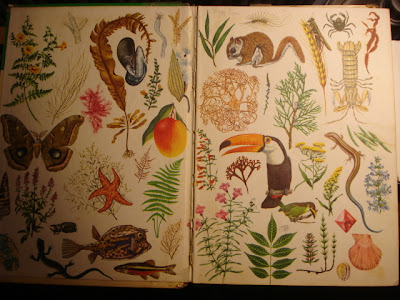 Toucans! Crabs with wicked-looking pincers! Funny-looking fish! And look at that blue-tailed lizard!  Many years later I'd find out that he's a blue-tailed skink, and I'd watch lizards like this bask in the sun on the front porch of one house, and scamper out of sight when I approached the back steps of another.  (I found that, if I sat very still, they would come back out settle down in the sun again, plopping on their bellies and tucking their arms and leg up at their sides, as though they were streamlining themselves in preparation for a dive.  Occasionally a flicker would catch my eye, as a tiny claw scratched a tiny itch.) 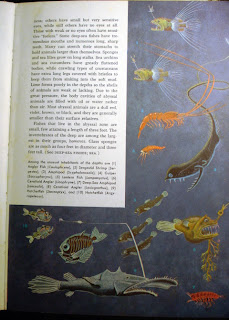 Here are more funny-looking fish.  These are abyssal species, meaning that they live far down at the bottom of the ocean, where no light reaches.  Just imagine swimming there in the cold, dark water and seeing these toothy monsters pass by, illuminated by their own lights.  When I was old enough to read the book, I read about them.

This book was volume 1 of  "Golden Book Encyclopedia of Natural Science".  It was probably bought by my Aunt in a grocery store, as part of a volume-a-month promotion.  (Through a similar promotion in the 1970s, I started buying volumes of a different nature encyclopedia.)  Volume 1 included "Abyssal", "Amphibian", "Aardvark", "Agouti" and "Aa" (a kind of lava). 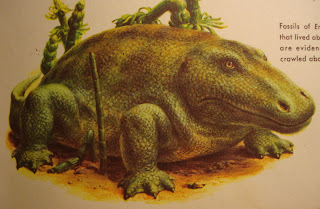 Here's my favorite picture of all.  This is Eryops, an amphibian who lived before the dinosaurs.  He seems to be tromping through a clump of horsetails. Many years ago, on my honeymoon at a state park in West Virginia, I saw horsetail fossils in a stream.

Long after Aunt Flora Mae had so generously given me this book, I noticed that it was edited by Herbert S. Zim, a man responsible for many other cherished books.  Among other things, Zim created the Golden Nature Guides.