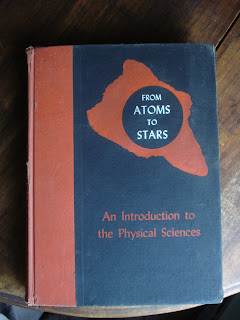 
One of them was this book, From Atoms to Stars, by Theodore Askounes Ashford.  It's an introductory "physical science" textbook that doesn't fit easily into any of today's textbook pigeonholes.  It covers physics, chemistry, geology and astronomy, and it does so in an engaging but uncompromising way.  It's not a typical survey course, or a "physics for poets" course, and it's not a "College Physics" or "University Physics" textbook.  It's chock full of real information delivered in an understandable way, drawn from a wide range of disciplines, following the natural progression "from atoms to stars".  It was exactly what I wanted at that time in my life, and it gave me so much understanding of so many things I'd wondered about that the book became a constant companion for many years. 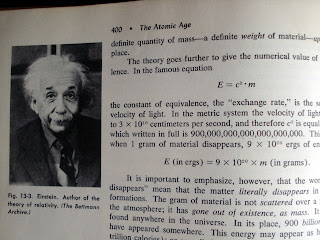 In preparing this article I learned a little bit about the book's author, and I now see two possible reasons for the book's unusual design.  First, Ashford attended and later taught at the University of Chicago, where a series of similarly eclectic courses called "Phy. Sci. 3" had been developed in the early 1930s.    Like Ashford's book, they covered the gamut of physical sciences, without watering them down.  Ashford completed his PhD in organic chemistry at UC in 1936.

Second, Ashford himself was largely self-taught.  He arrived in the United States from Greece as "Theodore Askounes" in 1922 at the age of thirteen.  He became a waiter in a Greek restaurant in Chicago, and (after his father's retirement two years later) provided most of the financial support for his family back in Greece.  During this time Ashford got credit for course work through the YMCA, which offered credit based solely on examinations.  By studying on his own and passing these examinations, he completed his elementary education.  He continued working through his undergraduate and graduate college career.  (While looking for part-time work as a teacher, he found that changing his name to the more anglo-saxon "Ashford" -- picked from the phone book -- significantly improved his prospects.)  The book From Atoms to Stars follows the natural progression that a self-taught scholar might travel while learning the physical sciences. 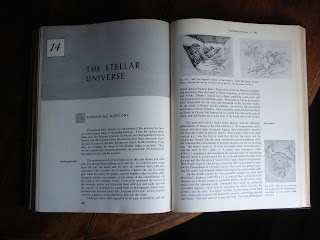 Science (and all learning) is about finding the order that underlies the seeming chaos around us.  One of my favorite writers, Stephen Jay Gould, tells a story about visiting a large cave that had a ceiling covered with luminescent organisms.  By reputation, looking up at the ceiling was supposed to remind one of looking up at a starry sky.  But to Gould, it didn't look like the night sky, and he wondered why.  In the end, he realized that the "stars" on the cave ceiling were evenly spaced, as each organism tried to maintain a certain minimum distance between itself and is nearest neighbor.  The night sky is ordered in a different way, as a result of different forces.  In the two cases, the different underlying rules are discernable by observing the two different types of "random" distribution. 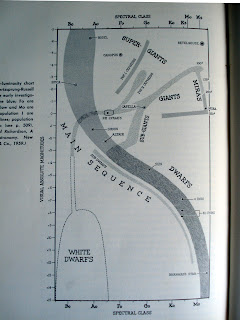 My favorite figure in From Atoms to Stars is another example of the same principle.  It's a Hertzprung-Russel diagram.  This shows, on one axis, the luminosity of stars (how bright they are), and on the other axis, the star's temperature (as indicated by its color).  These two measurements wouldn't, at first glance, seem to have an obvious simple relationship to each other.  Looking up at the night sky we see a jumble of all sorts of colors and brightnesses.  But when we make a diagram like this, we see that the measurements fall into patterns. These patterns actually tell us about the life cycle of stars.  The broad band from top left to bottom right is the "main sequence", full of stars in the prime of life, like our sun.  As most stars age, they move along the branch to the upper right, where they become red giants.  Then, they collapse leftward and to the bottom to become white dwarfs.  Looking up at the night sky we see stars in all the various stages of their lives.  By looking at this present chaos closely, we suddenly see the past and future of these stars unfold in our minds.  From what we initially perceive as a chaotic mess, we see rules emerge.  Similarly, jewels like this book emerge from flea markets.