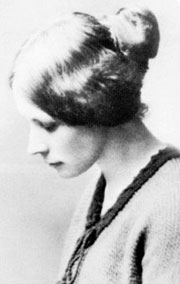 Although she was born decades earlier and on the other side of the Atlantic, Flora Thompson's stories of her childhood and youth remind me of the stories I heard from my parents and grandparents.
I first encountered Flora Thompson (1876-1947) in an epigram at the beginning of John Crowley's novel Little, Big.  It's taken from Lark Rise, the first book of Thompson's three-volume fictionalized autobiography, and it reads:

The autobiography's three volumes, Lark Rise (1939), Over to Candleford (1941) and Candleford Green (1943) trace the arc of Flora Thompson's life from childhood to adulthood.  The story is told thematically, rather than linearly.    The chapters are largely self-contained essays, and have names like "Poor People's Houses", "Survivals", "Callers", "School" and "Neighbors".   Most of them circle back and forth in time, perhaps beginning with childhood games played with her brother, then musing on the old age of her mother before coming back to brood over her brother's death during World War I.

Overall, the books look back on her early life and seem to ponder the problem of how she arrived where she was at the time of their writing: an adult living through a second World War, in an environment that was radically different from the world of her childhood. The thematic chapters sort her early life into neat stacks, searching for patterns.  They ask "How did I get here?", or "How did we get here?".

Flora Thompson grew up in extreme poverty in a tiny rural community in Oxfordshire called Juniper Hill.  In the books, Thompson calls the hamlet "Lark Rise", "because of the great number of skylarks which made the surrounding fields their springboard and nested on the bare earth between rows of green corn."  She changes her own name to "Laura".

Her writing is vivid, poetic and engaging.  It takes you by the hand and leads you through her story.  Flora's family lived in "the end house", a little removed from the rest of the hamlet.  She and her brother were keen observers and expert fabulists.  The passage immediately preceding the "bubbles of earth" epigram, above, reads:


"The children at the end house had their own amusements, such as guarding the clump of white violets they found blooming in a cleft of the brook bank and called their 'holy secret', or pretending the scabious, which bloomed in abundance there, had fallen in a shower from the mid-summer sky, which was exactly the same dim, dreamy blue.  Another favourite game was to creep silently up behind birds which had perched on a rail or twig and try to touch their tails.  Laura once succeeded in this, but she was alone at the time and nobody believed she had done it."

Flora Thompson's alter-ego Laura finds success through her interest in books.  She excels in school, and finds support for her interest in books from her uncle Tom, a cobbler in nearby Candleford and head of a large, happy family. Bookshelves in Lark Rise hold at most a Bible, a Pilgrim's Progress and a copy of Drelincourt on Death.  (Sir Walter Scott credits shrewd marketing by Daniel Defoe for the presence of the third book in even the poorest homes) but on one of her frequent visits to Uncle Tom's home, Laura finds that he is a fellow bookworm who has an attic full of books rescued from destruction after an estate sale.  Her scholarship leads, by the third volume of the series, to a job as assistant  to the postmistress in nearby Candleford Green.  Like her, the world around her is changing, as suburbs of many identical houses spring up in nearby fields and the old agrarian times begin to fade away.

Like Flora Thompson, my parents grew up in relative poverty, most extreme during the Great Depression.  Although their circumstances were modest even in the post-war world, my parents and grandparents clearly felt that they had reached the Promised Land: they owned houses, they had jobs, they had plenty of food.  Instead of farming, they found work as carpenters and house-painters and furniture-makers.  Life was good, and they were thankful.  They took meticulous care of everything they owned, appreciating each possession.  By their experience of poverty, my parents and grandparents were filled with a lifelong sympathy for those in need, and an ethic of sharing.  They stood at the end of a long, hard trip and, having caught their breath, spent many hours recounting the journey and trying to make sense of it.

During my own life I've seen men land on the moon, I've seen desegregation, and I've seen the "information revolution".   I've also seen bloody, senseless wars, riots and assassinations.  The completely obvious arc of human improvement I saw clearly laid out in front of me when I was young has swerved off in many unforeseen directions during my life, and in many ways turned back on itself or petered out, like a paved road that suddenly becomes rough gravel. Now, in middle age, I find myself looking back and trying to understand the journey we've taken.
Posted by Bryan Wright at 1:45 PM